Three months with no TV

As the post title suggests, this is the end of my third month without TV, after I cancelled my Sky subscription at the end of February.  I would like to be able to nobly intone that going without TV was a lifestyle choice, but the real reason I switched off was because the rugby I'd originally signed up for so many years ago was being used to manipulate viewers.  Basically, Sky have spent the last few years forcing customers to subscribe to more sports channels to get the same content, but this Super XV season they started to cut down the number of games shown as well, so I decided I'd had enough of being held to ransom (treating your loyal customers this way seems to be especially poor strategy in the internet age, where free live streaming of sports events is just a google search away, but that's another matter...).

To cut a long story short, not watching sports TV or the movie channels at night has freed up a lot of time, and I've tended to spend that time painting.

So, how has it gone?

Well, after three months of doing a little painting every day - sometimes as little as ten minutes, sometimes as much as three hours - I have quite a few painted figs to show for it.

I'm three or four sessions away from completing another 50 cavalry, so if I cheat a little and squeeze them in, we've got an average monthly output of around 10 6mm vehicles, 86 15mm foot and 22 15mm horse.

I've already exceeded last year's painting totals in this time (barring the 6mm stuff), so I have to say that this no TV caper has worked a treat.

Also, I haven't missed the rugby as much as I thought I would...

As an added bonus, the blood pressure seems to have gone down now that I have no chance of accidentally stumbling across those 'history' channel shows featuring some wild-eyed fellow demonstrating 'conclusively' that (insert historical figure here) was in fact in communication with alien beings!! 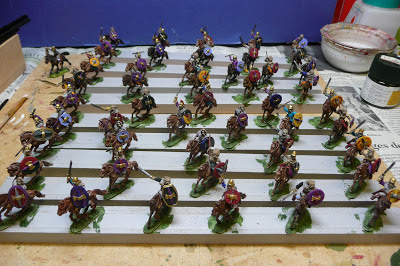 OK, these aren't quite finished, but I'm including them in the tallies anyway...