The hobby room has had a reshuffle of late with my wife's sewing stuff having been moved in there, which means that it had been a while since I'd had a proper miniatures battle at home.  Last night had seemed like an appropriate time to get back on that particular horse, and - as if on cue - around lunchtime the breeze (or perhaps it was the aircon) began whispering 'Asculum; Asculum.' 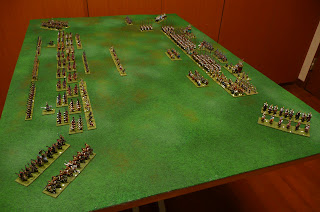 Under Lost Battles Pyrrhus has a fighting value of 85 versus the 77 of Decius and Sulpicius, equating to a 24 point handicap.  This means in practice that Pyrrhus needs to shatter four legionary units to be on equal terms.  This is by no means an insurmountable task, but the Greek will need to proceed with caution and look to minimise the risk to his own forces.  When fresh his phalangites are strong against the legions, for they can attack in pairs to get a combat bonus (and fresh lead phalangites get a bonus against legions as well).  Less happily, the left flank of the infantry line is made up of a hodge-podge of generic heavy infantry types, so they will find it harder going against the Roman troops and could be a potential weak link. 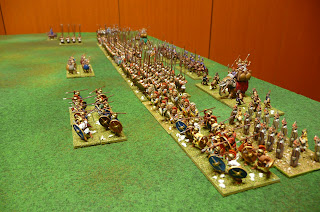 Pyrrhus needs to work with flexibility: he will look to try his luck with the infantry and hold back a little on the flanks to see where the main attacks will come.  Once the Romans make their move he can direct his mounted reserves to shore up vulnerable areas and may choose where to concentrate his own assaults. 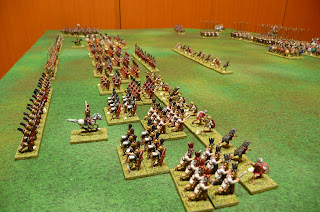 Decius waves to the crowd.

The first turn begins with Pyrrhus (known as 'The One' on account of his frequent production of that number in command rolls) ordering a general advance in a centre.  He has lived up to his epithet, and does not have the commands to do anything fancy with his cavalry.  They simply dress ranks, move forward to face the enemy and await proceedings. 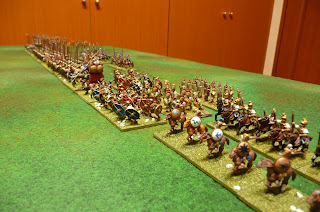 The cavalry and infantry align.

In the centre an eager unit of Italian allies scores a hit on the Roman skirmish line, drawing first blood. 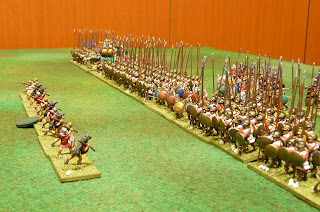 The phalanx and the shaky levy lights.

The Roman machine now sets itself in motion: Decius advances his right centre and the centre itself moves up to relieve the skirmish line before it can get into any further trouble.  Sulpicius holds the left centre back, unwilling to face the cream of the phalanx without having given his men some sort of advantage.  On both flanks the Roman cavalry about-faces, but, daring the Greeks to charge in from a distance, elects to advance no further. 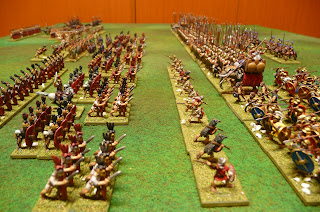 Decius proves he can advance and wave at the same time even though he's only rated as an 'uninspired commander'.

With two thirds of the Roman infantry line in striking range, Pyrrhus makes the most of rolling a four for command and gives combat bonuses to his left centre and central phalanx.  He does not advance the cavalry on his wings, nor the infantry on his right.  Everything is thrown into delivering a weighty opening blow.

This proves to be the right decision: he observes his 'weak link' left score three hits at a cost of one to itself and the centre chime in with another.

As if things were not going badly enough, the Romans now roll a one of their own.  Although there are only 8 command points to play with, it's now or never - the cavalry must attack.  Accordingly, the left flank advances, absorbing the negative modifier for moving before an attack, and scores a welcome and morale-boosting hit. 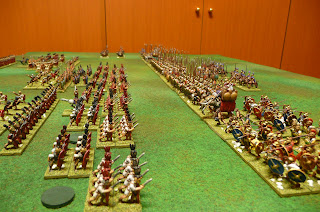 Who's the weak link now, eh?

Pyrrhus the One (once again) is now faced with a dilemma: which flank should he reinforce?  After some consideration, he decides that losing on the right would be most destructive, as it would see his valuable infantry line there outflanked.  In conjunction with an advance from Sulpicius, this could be enough to win the battle for the Romans.  Therefore, he reinforces the right with a unit of veteran cavalry, but not before the original denizens of that flank have scored a hit there and the left has also charged home to add two of its own. 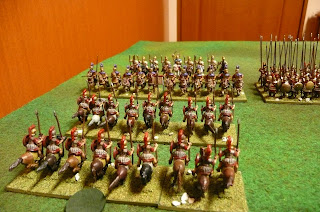 Reinforcements arrive on the Greek right.

Despite a quiet turn in the centre the 'weak link' does yet more damage to Decius' zone.  The centre right still holds its place in the line awaiting the outcome of the events on its flank. 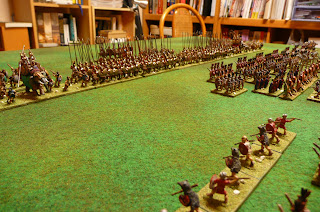 The Romans appear to be inviting the Greeks to advance into the pocket.

The infantry battle continues, with the Romans managing to make some gains in the centre.  Events there take a dramatic turn as Pyrrhus is forced to start attempting rallies so that he may retain a unit of fresh infantry in the lead position and a fresh pair of phalangites for the attack.  Decius is also beginning to make inroads, with all but two of the units opposing him now spent.

Much depends on the cavalry.  If it could just win a flank...

But the rolls come in, and it is clear that neither flank will be won quite yet. 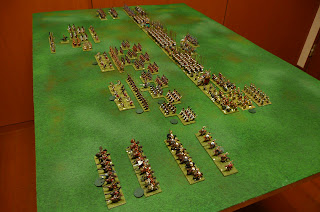 An overview of the field as the moment of decision nears.

With the issue in the balance, Pyrrhus rolls a two.  He give a bonus to the cavalry on the right, but all three attacks miss.  The cavalry on the left is not given an attack bonus, and these two units also miss.  With nerves frayed, he orders an assault in the left centre.  The tension is eased somewhat as a hit is scored, Decius fails in his rally attempt, and the first unit is shattered.  The levy light infantry run off from the shock, leaving three units in the zone.  Finally, although the results in the centre are again inconclusive, it is evident that the Romans are being worn down. 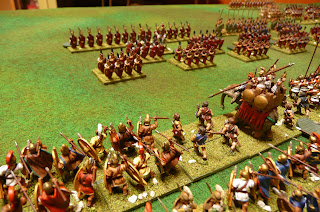 There's our opening, gentlemen and elephants!

With the onus back on the Romans, it's time to break a wing.  The assaults are valiant, but with only eight commands to play with there are not enough combat bonuses to go around.  The lack of command points is particularly telling on the right, where both attacks would have succeeded if bonuses had been available. 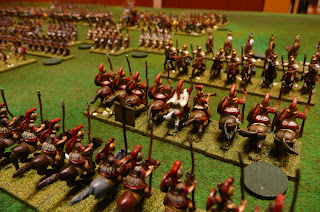 What we wouldn't give for a combat bonus right about now...

On the left, one attack is successful, but the second cannot score the hit that would have caused a shatter.  Things are better in the centre though as the infantry come roaring back into the fight, shattering a unit of Samnites on the Greek left and leaving all but one of the infantry in the central zone spent.

With Pyrrhus now in the ascendant, he obliges by rolling a three for command and commences with the 'weak link' zone.  Leading off with the elephant unit they score a double hit.  Decius rallies one, but is killed by the other, and the collapse begins. 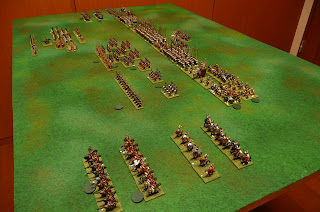 Decius has joined his forefathers, waving even in death.

This time the cavalry charge home on both flanks with no hesitation.  All four of the Roman cavalry units are shattered, and the flanks are laid bare; miraculously, the legions do not run. To add to the misery, units are also shattered in the centre.

The Roman line holds out for another turn, but cannot claw anything back and is swept away in Pyrrhus' next attack.

With the forward line gone, Sulpicius' men are quickly surrounded and while they score three desperate hits of their own, it is Pyrrhus himself who administers the coup de grace with a devastating flank attack. 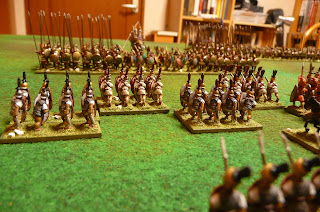 "Join the army they said. See the world, they said..."

As the final analysis is made it becomes apparent just how hard-fought this victory has been.  With one Greek unit shattered and seventeen units spent, the Romans have gathered 83 victory points.   But with nine Roman units shattered, a general killed and the remaining units routed, Pyrrhus has scored 105 points, which is enough to record a narrow victory.

All hail the victor, and it must be time for the Romans to raise another army...
Posted by Prufrock at 4:26 PM