Entertainment in a time of COVID

The bell finally tolled for me on Sunday. I'd had a minor sniffle come on Friday night and thought nothing of it. It then progressed to sneezes on Saturday, so on Sunday I decided to get a test before heading out anywhere other people might be. I was sure it was just a bit of a cold, but the RAT test immediately clanged out 'COVID!'

With the wife and kids away in Japan visiting family, I did not have to worry about passing it on to them, so I just got in touch with work, ordered some food to be delivered from the supermarket, and settled down to wait it out for a week.

In my favour was the fact that there was a cricket test on. Sadly, we were getting royally thumped, so it was a slightly blue Prufrock looking out the window on Monday who saw a package had been delivered.

Wouldn't you know it, it was Mike Lambo's Battles of Medieval Britain, for which I'd put in an order about six weeks previously and almost despaired of ever seeing. As it turned out, its arrival couldn't have been better timed. 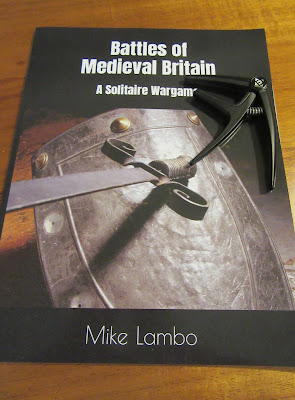 The book includes ten pages of rules and solitaire game representations of twelve British battles. These being:

Each battle comes with a one page full colour hex map and an accompanying description of the information necessary to play out the battle. The rules are clear and simple, need only d6s, and contain nothing that could cause (or exacerbate!) any headaches.

Set up is not fixed: the defending units are positioned by dice roll, as are any reinforcements when they arrive. With only five types of units, you can retain all the unit characteristics in your head and just focus on beating the game. The order generation mechanism is quite neat, and combat is of the 'score x on 2d6, with various +/- modifiers' type.

- mark off turn on turn track

- roll for and place any applicable defender reinforcements

- activate each player unit one by one by rolling a number of dice to generate orders. Use (or don't) orders as desired

And that's it. Defending units don't move (although defending reinforcements will appear during the battle), so it is up to you as the attacker to calculate the best way to defeat the enemy in the number of turns available.

The battles are essentially military-themed interactive puzzles, somewhat akin to chess problems, but with variable set up and random elements to consider. To make it easier you can give yourself an extra turn to achieve the objectives. To make it harder, give yourself one fewer.

I've played through the first two scenarios already, and they are a cool way to pass a bit of time. Simulations they are not, but if you want to spend a half hour exercising the brain and rolling a few dice, you could do a lot worse.

And as for providing entertainment while isolating with COVID, it does the job!