Last Sunday was the Society of Ancients' battle day, and the battle they were doing was Bosworth. Although a week late, I thought it would do my own version of it on the kitchen table. The rules would be simple - I would use Table Battles by Tom Russell of Hollandspiele - and these rules, unlike the Society's, would use cards, dice, sticks and cubes. 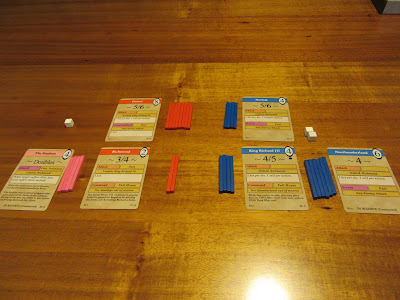 Richard would start, having six dice to roll and assign. But first, a little explanation of the game. 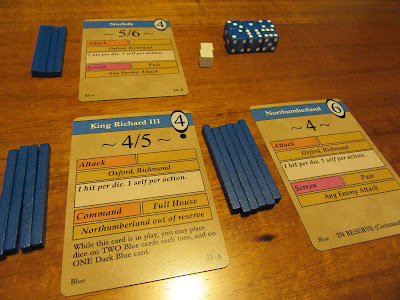 As can be seen in the image above, Richard has three formations to consider. Norfolk and his own can fight right from the beginning, given the right dice. Rolls of 5 or 6 can be apportioned to Norfolk; rolls of 4 or 5 to Richard. Northumberland cannot be used at this point because he is in reserve. To bring him into the fight, Richard needs to accumulate a full house - three 4s and two 5s (or vice versa), which is quite a tall order when there are only six dice to use.
For each attack that Norfolk or Richard make they will lose one of their formation sticks, and will remove as many formation sticks from the enemy as they use dice, so it is to their advantage to use as many as possible in each attack. Norfolk can also use a pair of 5s or 6s to screen enemy attacks (i.e., the attack fails with no loss to either side). 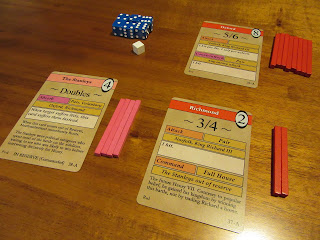 Henry's cards are similar. He has Oxford and himself in the front line, and the Stanleys in reserve. 3s and 4s activate Richmond; 5s and 6s Oxford. As with Northumberland, a full house of 3s and 4s will bring the Stanleys into the battle.

Both sides start by stacking dice on a single formation card, as shown in the picture below. 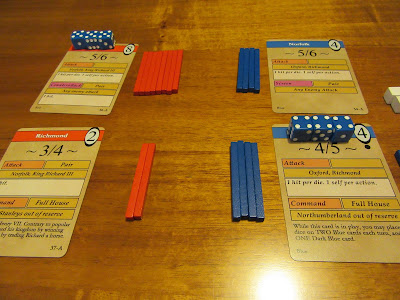 Richard attacks first, removing three sticks from Oxford and losing two himself. He then concentrates on building up dice on his own formation again. Oxford also attacks with three dice, hitting Norfolk badly, and reducing him to one stick.

As shown above, both sides have three dice in play again, but this time it is Oxford to move. He attacks Norfolk, who is destroyed. Henry takes a morale cube off Richard. One more is needed for the victory.

The only way Richard can win now is to get four dice on his card to take out Oxford with one attack, and then turn his attention to Henry. Over several turns he saves up his dice, but can only manage three 4s.

Oxford, with a pair, is able to play and remove Richard entirely at a cost of one formation loss to himself. 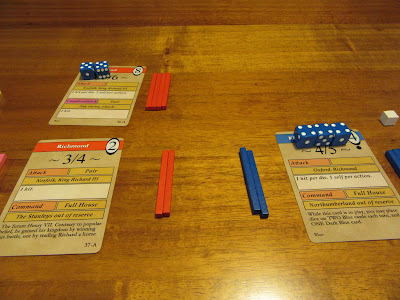 Northumberland has not entered the battle and Henry is the victor. Bosworth I to the kingslayer! 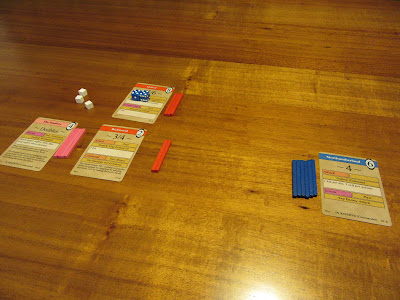 Bosworth II starts with a powerful attack by Norfolk doing three damage to Oxford for one to himself. Henry rolls poorly and is unable to populate his cards with dice. Richard has no such trouble. 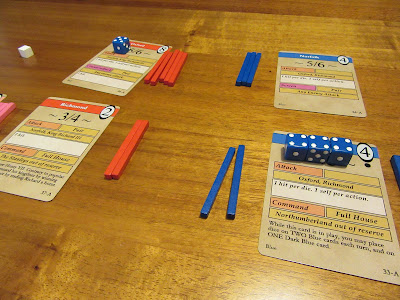 With Richard to play in the sitaution above, he inflicts three more hits on Oxford. Henry is still struggling to get the dice in play. 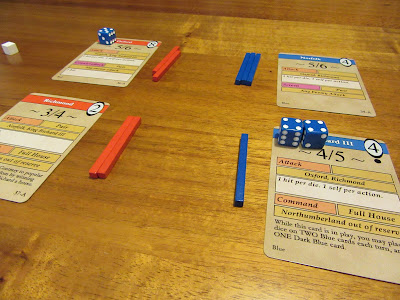 Richard seizes the moment and attacks Oxford again. Both formations are removed at the same time, so no morale cubes are exchanged. It is now a contest between Norfolk and Richmond to collect dice for an attack. 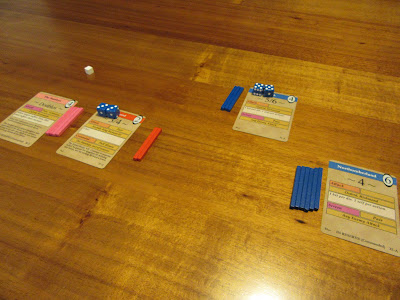 His two dice are enough to destroy Henry at a cost of just one formation hit to himself. Bosworth II goes to Richard. 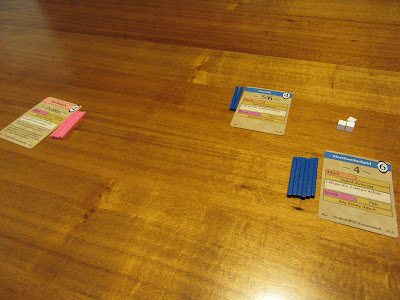 We go to a Bosworth III to find the winner. The third battle commences with another 3/1 attack by Norfolk 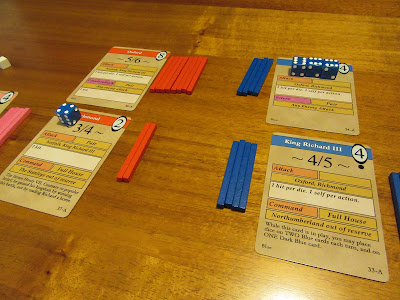 A 3/2 attack from Richard follows from the position below. 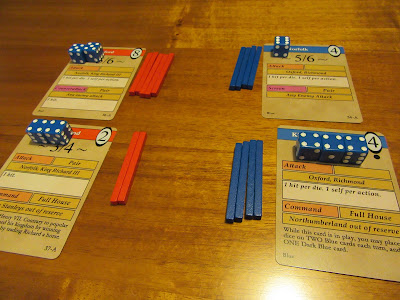 Once again Oxford is in a precarious state. Richmond stacks dice hoping to obtain the full house needed to bring the Stanleys into the line; Richard just stacks dice. Battle continues for a few turns with Norfolk successfully screening some attacks while the house of York gathers its strength.

A pair on Norfolk will be enough: Richard only needs to capture one morale cube to claim the win. 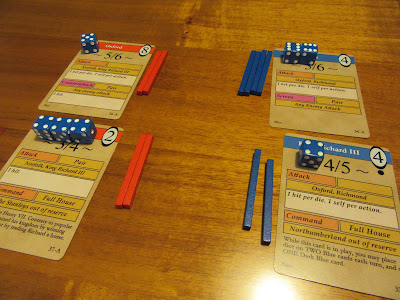 And the deed is done! Richard wins two battles to Henry's one. 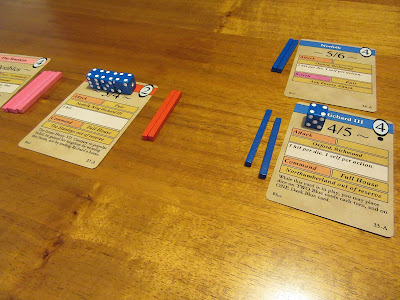 And so my battle day is over. Not quite as satisfying as a two hour game with figures, but a fun way to get into the spirit of the event, play the battle, and have hardly any clean up required.

It was an unexpected piece of serendipity to find that today was actually the anniversary of the battle. All in all, I think it worked out rather nicely!