History of the World (part 2).

Carrying on from part 1 of my solo, game-learning play of the 'History of the World' boardgame, and with the world still reeling from the Pax Romana (who made a desert and called it peace?), the third epoch of human history began.

The Guptas, appearing in Deccan, claimed the entire Indian subcontinent from its previous inhabitants the Mauryans, but not without some hard fighting. Sculpture, painting and architecture flourished! 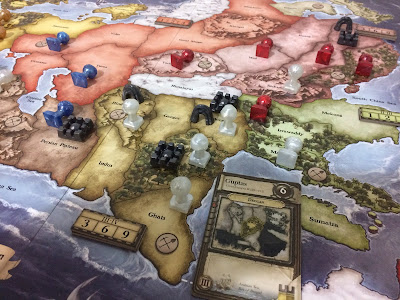 But the red team could not be held for long: the indignant steppe Huns rose and bore down upon China, Eurasia and Southern Europe, to seemingly alter the landscape forever. 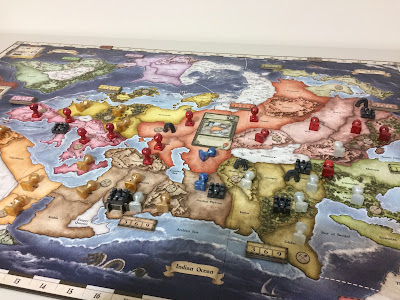 The Byzantines however had a story of their own to write. They gained almost total mastery of Europe North and South, and with their legacy peoples still in Africa and the Middle East, the future was looking, um, golden. 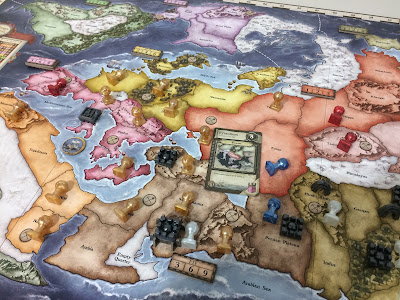 History then gave herself over to the Arabians, who repopulated the Middle East, as was only meet. Despite their great numbers, they were unable to proceed much farther, as the descendants of the Guptans resisted the invaders strongly. 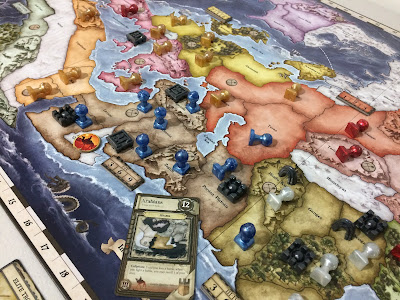 At the close of the third epoch, Red led Gold, with White and Blue fighting for third place.

Era four commenced with the establishment of a satellite kingdom in Japan and a Viking charge into what would later be known as the New World. More points for Red, who dominate the northern hemisphere. 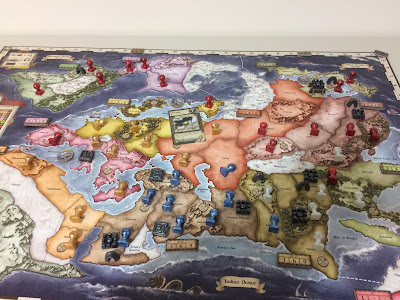 At that a great khan appeared to unite a hardy people of the plains, but he must have REALLY displeased the gods, because almost half of his attacks were unsuccessful. Behold the blue horde grouping! 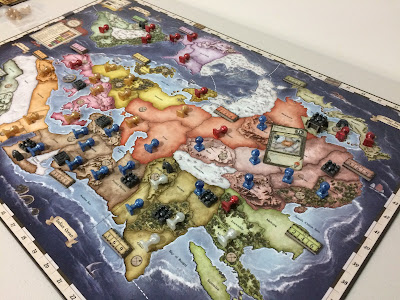 The Ottomans came, saw and conquered, but were unable to extend their influence into Europe or Eurasia. 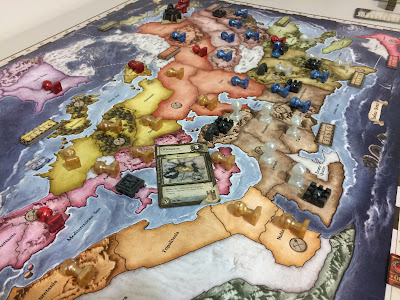 Next the age of discovery dawned. If the tall ships of the Portuguese failed to land in the New World, they did however have the satisfaction of opening a trade route into Eurasia. Spicy! 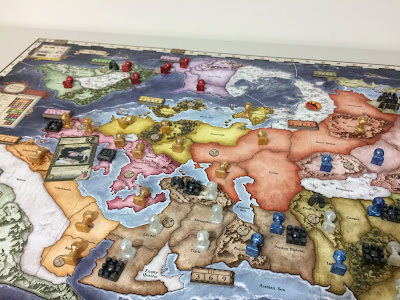 The fifth era started with courtly grace as the Qing expanded their influence with spectacular success, establishing dominance in Southeast Asia and even reaching Australia. A good haul of points resulted, but not enough to catch the leaders. 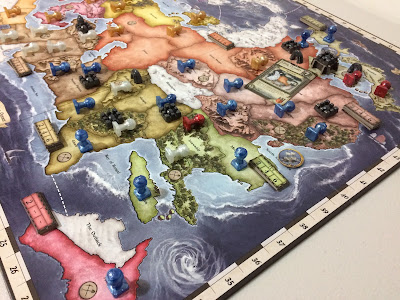 North America, Africa and the Middle East then fell to the British, who bestrode the world like Colossi from their island fastness (didn't get to Australia, but).

On cue came the proud Americans. Freedom this, freedom that; supremacy in North and South America; a foothold in both Europes. To add insult to grevious injury, they captured Britannia! 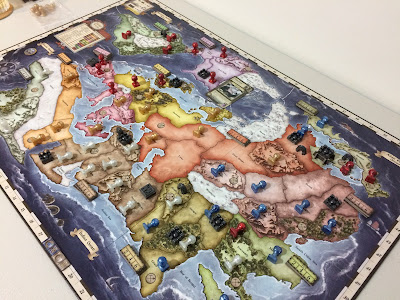 The last empire of the game was the Germans. Predictably, they put northern Europe in thrall. What was not in the script was that they then liberated Britain from her American masters. They had no truck with Russia. A golden German finish it may have been, but it was not enough to take victory from the Red team. 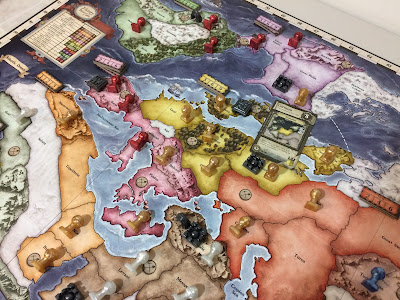 At the end of it all, the final scores were as follows: 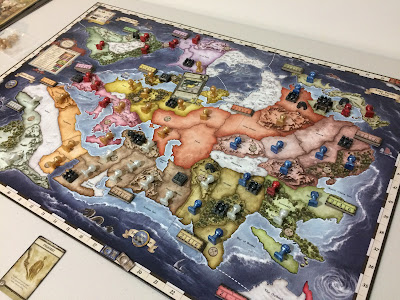 Playing History of the World solo was a heap of fun. Having had this run-through, I was consequently able to teach the game to three Risk playing buddies the following week, and they enjoyed it as much as I did.

It takes a good three or four hours, which is time enough to get involved without being quite long enough to get bored. The only issue I can see is that players who fall behind early may find their interest waning. It is possible to score big later in the game, but it is harder to do this if you don't have legacy pieces still on table, so with a bit more player experience and some developing tabletalk, it may turn into an experiment in diplomacy as well.

To conclude, I think we've found a good one here!

Email ThisBlogThis!Share to TwitterShare to FacebookShare to Pinterest
Labels: boardgames, History of the World, Z-MAN Games