My first batch of 15mm figures for the year has just been completed and flocked. As recent posts have suggested, they are Greeks, with a few extra hypaspists to bring the tiny force I had up to a full unit of 16.

These are all Xyston figures and are intended to provide a force of 'generic' Greeks who can be used as anyone. I have plenty of Thebans and Spartans (most still unpainted, sadly!), but you need a bit of variety and flexibility in your Greeks, and these will go some way to offering that versatility.

There's actually quite a nice story behind these figures. Years ago I'd taken advantage of Brookhurst Hobby's ongoing clearance sale on their early Xyston stock to pick up tonnes of unarmoured hoplites, and lots of Spartans and Thebans. I was dreadfully short of armoured hoplites though as they'd all gone by the time I heard about the sale. Anyway, the figures arrived and all got filed away for use when I got around to painting them.

A few years later by chance I found a chap who had a bunch of Xyston figures he was trying to get rid of. They were painted and based, but not quite to finished standard, and he was letting them go at a very good price. They were just what I was looking for, and this fellow being a great guy to deal with was happy to send them over to me here in Japan with no problem at all. The upshot was I ended up with about 50 mostly painted armoured hoplites, which, when I added in my unarmoured and a few other bits and pieces, were great incentive to get cracking on this contingent.

They are finally done and it's nice to feel that I've been able to do justice to another fellow's project as well as to my own. 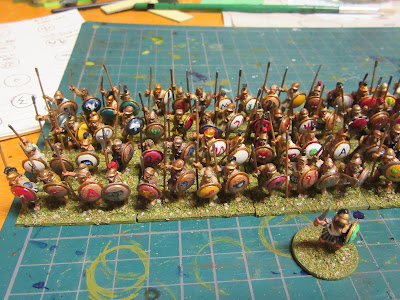 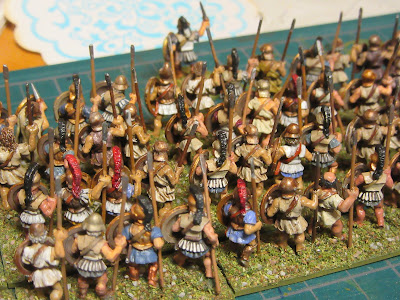 So a most satisfying bunch to have ready for action. This means I now have 13 units of Xyston hoplites of various stripes as well as 5 others from different manufacturers. Almost getting to gameable territory!