I am very happy to report a new batch of figures done. These are in fact the first figures I've managed to get painted all year, which is pretty poor, even by my generally miserable standards!

They are a mix of Essex 15mm Dark Age cavalry and Frankish cavalry and were the last lot to do for my Normans/Saxons/Vikings Dux Bellorum project. I say Dux Bellorum, but they can be used for any 'unit-based' rules-sets, such as the Neil Thomas rules, Impetus, or whatever.

They had been sitting in a box for quite a while. I don't know if you've ever had that feeling after you've made a big push to get most of a project done that the bits and pieces - the non-essentials - can be quite a bit of a mental hurdle. It's not so bad if it's twelve generic foot or something, but when it's 30 cavalry it's a little more than just a night's work! Anyway, I couldn't face doing so many leftovers in one go after having maxed out on Normans, Vikings and Saxons, so into a box they went.

But they've been done in the end. For this project I've been using a simple dip method: block colours in, give a darker wash for horse tails etc, then give everything my acrylic dip treatment. I may then highlight a very select few things (the odd cloak, a leader's helmet, but that's it), base on 60x40, and hit the varnish. It really does help get troops on the table.

Anyway, here they are. Still needing their matt varnish and flock, but aside from that, done. Phew! The year is still young - could even get a few more batches done... 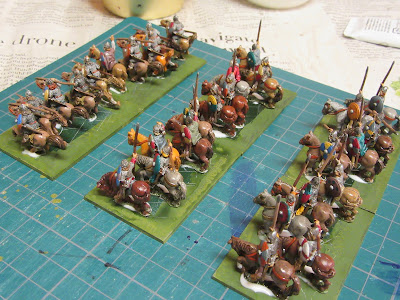 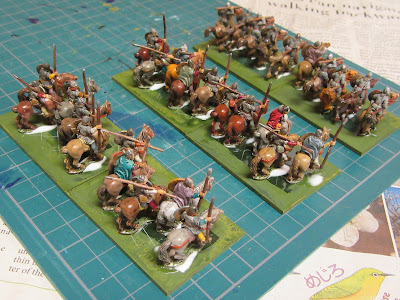 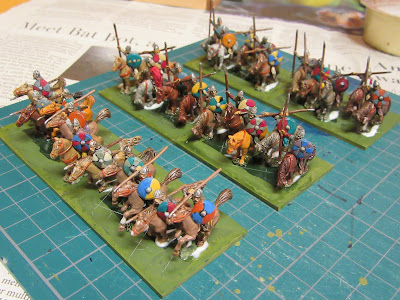 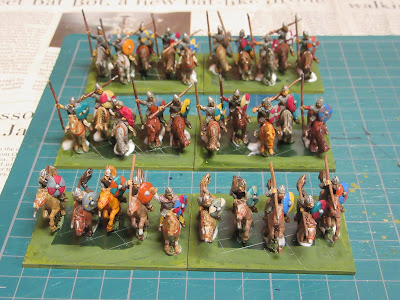