For a while I've been gearing up to make a modular terrain set using interlocking carpet tiles. The difficulty has been in finding carpet tiles in the quantities needed, but after stripping the local store of another stack last weekend, I decided that I had enough to proceed.

The main impetus behind this project is Lost Battles. I'd seen the terrain that Phil Sabin and friends use for their demonstration games and decided that that was the kind of thing I'd like to go for.

With a day off today and no family activities planned, it was time to take the first step, which was to make the hill tiles.

After reserving twenty-four tiles for flat terrain (Lost Battles uses a 5 x 4 configuration, but I wanted to be able to do 6 x 4 for games with other rules), I had twenty-nine left to use for hills and other things.

A couple of hours of hacking away at them with a hobby knife resulted in thirteen tiles that can be arranged in various ways to create any of the Lost Battles scenarios. 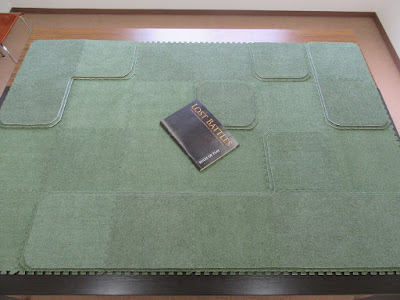 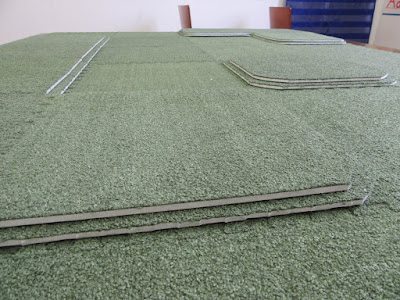 Unfortunately, I now have to pause, because another fifteen or so tiles are needed to make the river sections.

If I can't track down any more carpet tiles I'll have to look at buying some flexible plastic rivers such as these instead, so if anyone has personal experience of such items and could recommend other manufacturers, please let me know.

Cheers all, and hope it has been a good weekend for everyone.