Action at Chaeronea: the background

Now that I have my Companions and Thessalians painted up I thought that I would celebrate by getting Alexander to the table. I don't have enough Greeks or Persians ready to give him battle yet, but I thought I could cheat a little, and a quick browse through the Lost Battles scenarios gave me just what I needed.

We present, therefore, an action at Chaeronea, in which the old lion, Philip of Macedon, using his army from Chaeronea 338 BC, challenges the army of P. Decius Mus and P. Sulpicius Saverrio - plucked from the battlefield of Asculum, 279 BC, and deposited in place of the Chaeroniac Greek coalition - to a fight for possession of the field and the glory that accompanies it.

Allow me then to introduce the Macedonian army.

Philip himself will lead the Agema as an inspired leader commanding veteran heavy infantry. He also has two other veteran infantry units in the hypaspists. My figures are sarissa-armed, but for this encounter they will be classed as heavy infantry, not phalangites. These veterans will normally hit Romans with a 9 on 2d6, but under favourable conditions can reduce the required to-hit score to an 8. Under exceptional circumstances they can hit on as little as 6. In addition, their narrow frontage is a big advantage: they only take up half the frontage of a normal unit, so it becomes possible to get more attacks in as well.

The main body of the army consists of ten units of average quality phalangites (the foot companions). They will normally hit legionaries on a 9, but can pair units together to make an attack that will hit on an 8. If given a combat bonus by a general, they can bring that down to a 7.

They are formidable infantry to face on the tabletop. 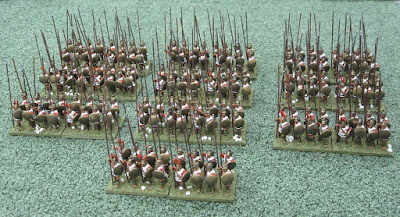 In support are two units of average heavy infantry and two units of average light infantry. The light infantry will be used to blunt the enemy's initial attacks and then fall back behind the main line, thereafter popping up occasionally to take pot-shots from a suitable distance. The heavy infantry will be used to protect the phalangites and allow them to concentrate on attacking in depth.

Both types will generally hit on a 9. 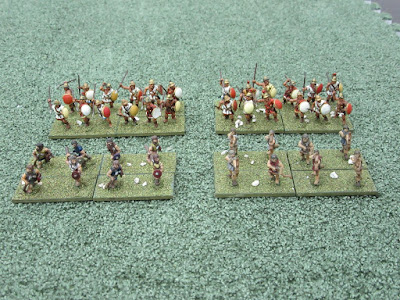 Last, but most deadly of all, are a young Alexander and his cavalry Companions. Two units of veterans and one unit of average cavalry (Thessalians) give the army real punch. With Alexander (classed as an average leader) leading from the front, the cavalry will hit enemy horse on a 4, and score a double hit on an 8. They are less effective against foot frontally, but attacking from flank or rear they will carve up legionaries as well.

There are not many of them, however, so the decision to commit them to the charge will be a key moment in the battle. 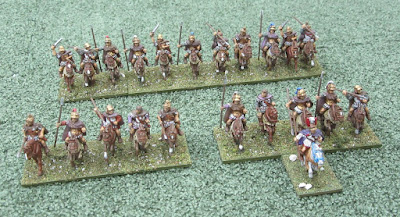 The Macedonians have a very solid core of foot, with strike power in their veteran infantry and cavalry. They have various options for deployment, but will be at their best formed in depth. I would feel more comfortable if they had a unit of light cavalry, but they should still give the Romans plenty to think about.

Turning now to those Romans, we introduce the army as it was at Asculum.

Legionary class troops are stubborn. Not only do they refuse to rout until the situation is extremely dire, but they are pretty good at blunting frontal attacks by enemy infantry as well.

The commander is poor quality, however. An honest trier no doubt, but poor.

Next up are seven units of Roman legionaries, again classed as average, again with supporting light infantry rated levy.

There is no real difference between the Roman citizens and the Latin allies. They are also stubborn, and, like the Latins, will hit enemy infantry on a 9. 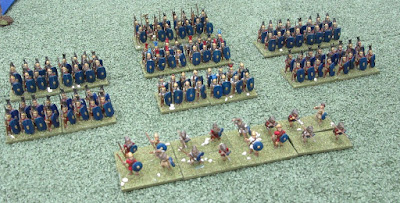 We come then to the cavalry. The Romans, surprisingly enough, have nominal cavalry superiority here. Four units worth 12 points against 3 units worth 11. They do not have an Alexander leading them though - just a Publius Decius Mus.

Under perfect conditions they will hit enemy cavalry on a 5, and may well prove a tough nut to crack. 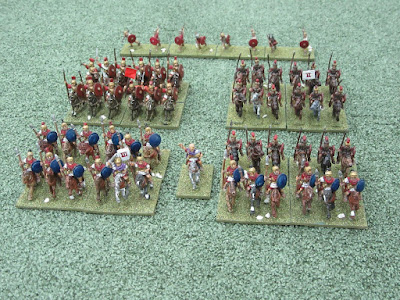 The Roman legionaries will put up a hard fight, but in a straight up slugging match they will likely be worn down by the Macedonians who will get in more attacks per turn. If however they can prevent Alexander getting in behind them and can get into their stride early against the phalanx, their superior morale might just see them do all right.

And so we have the armies. To conclude, it's worth noting for the record that the Macedonians have a total fighting value of 83, of which 18 points are tied up in their commanders. The Romans have a total FV of 77, only 6 points of which are in commanders. It will be a tough fight. A lot will depend on how the Macedonians use their strike troops, and much will also depend on the battlefield terrain.

Speaking of which, here the battlefield is. Looking from the northwest, with the town of Chaeronea on the hill in the foreground, the Macedonians will be deploying on the left and the Romans on the right. The hills, watercourses and marsh will make this tricky terrain to fight over, and it will be challenging to both armies to best use their strengths and attack enemy weaknesses. 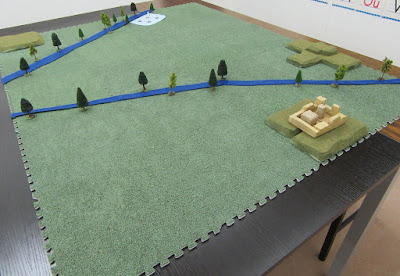 With the preliminaries out of the way, it is now time to go and fight the actual battle (see here for the report).

Game on, as the kids say these days!

Thanks for reading so far.