It's been some time between wargaming drinks but I cracked open a new wine the other night, this being Budapest '45 from Command Magazine.

I'd played and enjoyed the chaotic Ukraine '44, and after being told on Consimworld that that MMP title was derived from the Budapest '45 game I hunted around and managed to locate a copy of its older sibling.

The thing I really like about the system is that it tracks combat losses right through. If you have a panzer division with 21 attack points, it will take 21 step losses to eliminate it. There's none of this "Oh, a six, you're dead and I'm fine" or "Damn a one! I'm dead, but you're okay". This is constantly and grimly attritional. Whether attacking or defending you're going to lose at least one step, and maybe up to five if the odds are bad or if someone's forced to retreat into an enemy zone of control. There's bookkeeping, but that's okay by me (I am a miniatures gamer, after all!).

Another thing about it is that you don't know what you are up against in turns of combat strength. The combat ratings are on rosters, not the counters, so you don't know what strength the enemy has there until you fight. You have to use a combination of intuition ("Hmm, a Guards mechanised unit has just come into the line. Will it be weak or strong?") and memory ("Ah, we had a 2:1 against those chaps last turn and they took a few hits. Let's whack them again!) in planning attacks.

These elements make for great solo play. The only rule change I have made is that I don't hide unit designations, and I allow myself to look up the attacking strengths but not the defending ones when planning attacks. So far it has worked out brilliantly. I've made foolish attacks once or twice after underestimating enemy strength while on other occasions I've avoided combat because I didn't know what the active side was up against.

An unexpected bonus is that I have so far avoided the analysis paralysis stage I seem to get to when soloing boardgames with full informatoin. I often reach a point where it just starts to become too much hard work when I can see the response to every move I will make and am trying not to let that affect the game.

It has made for excellent and refreshing solo gaming.

The situation is an interesting one as well. The Soviets have Budapest under siege well behind the front lines and the Germans are tasked with breaking through these front lines to relieve the city There is a quality versus quantity dynamic as well as competing cycles of manoeuvre-attack-reorganise and defend-retreat-outflank.

Anyway, enough chatter. Here's the board at set up, with separate rosters and turn record sheets for both sides. 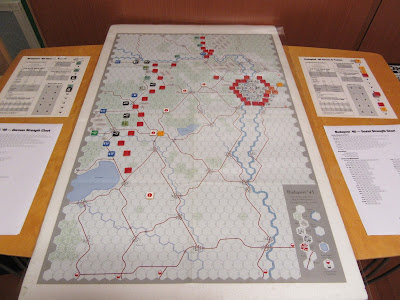 To look more closely at the board, the Germans are aiming to pressure the Soviets all along the line and hopefully achieve a breakthrough in the north and the centre, while keeping enough force in the south to prevent the Soviets from being able to mount a strong southern counter-attack. 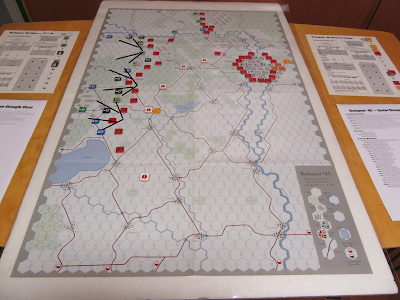 By turn three (January 4-5), the Germans have made progress, but the Soviets have been able to pull back the line and avoid any catastrophic breakthrough. 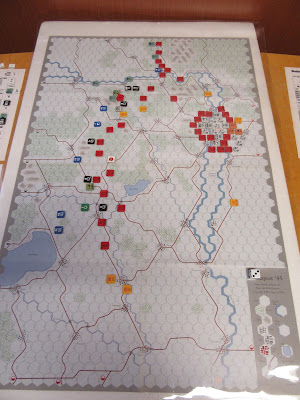 By turn four the Germans in the north have pushed to within about 25 miles of Budapest, but the Soviets are still able to offer defense in depth. 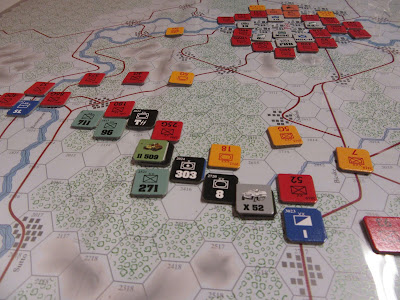 Further south the German attacks are obliged to channel north or south of Lake Valense.... 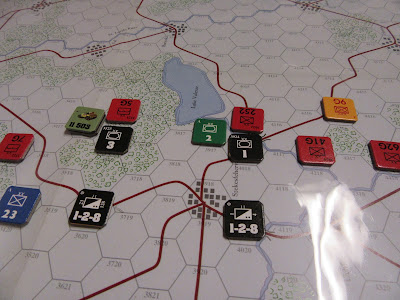 ... which prevents the Germans from concentrating for a breakthrough at one point and allows Soviet reinforcements to threaten an outflanking movement against the weak flank guards. 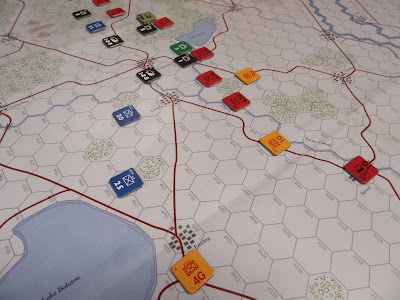 Meanwhile, in Budapest, the Soviets are whittling the defenders down, helped by some fearsome artillery barrages. 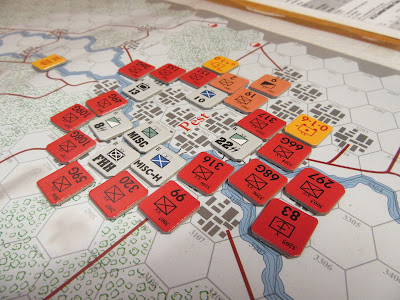 And so to turn five. The defensive line is still holding, but it is running out of room to fall back. 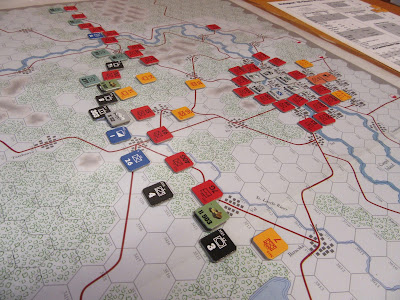 Now it is decision time for the Soviets. Do they launch a counter-offensive in the south, pull units from the south and send them to reinforce the centre, or do a bit of both?

Enjoyable times in house Prufrock, and what solo wargaming is all about.

Time to pour a drink and get back into it!