After finishing another batch of figures I thought it was time to get the Dux Bellorum project to table. Despite not having proper Norman spearmen yet, I decided I'd have a crack at a Norman / Anglo-Saxon game, based roughly on Hastings.

The Norman army had four units of knights, one spear, two bow, a foot skirmisher and a mounted skirmisher.

The Anglo-Saxons were possessed of a hill, eight units of shieldwall infantry and two units of foot skirmishers.

Both sides had the standard complement of six leadership points that are used to do things like roll an extra attack, ignore a hit, move a unit out of sequence or improve an activation roll.

The table used was an 80 x 80 board made up for my sidelined 'One Hour Wargames' project. I played in the dining room, hence the bad lighting and assorted sofas and mess in the background. Apologies! 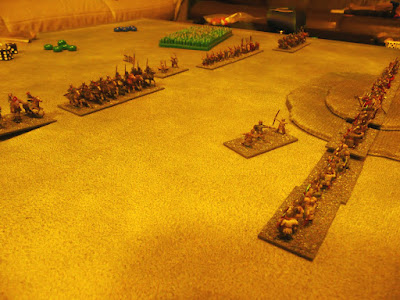 The game turned out about how I would have expected it: the Normans chipped away at the Saxon line on the hill with missile fire and worked on getting the knights into positions to flank the ends of the line.

Once the Anglo-Saxon skirmishers were in awkward positions the knights charged in, and although the Saxons came down off the hill when they could, the loss of leadership points due to the eliminated units meant that the Saxons were unable to shore up the line everywhere. Under pressure from attacks on both flanks and bowfire in front, the Saxons crumbled. 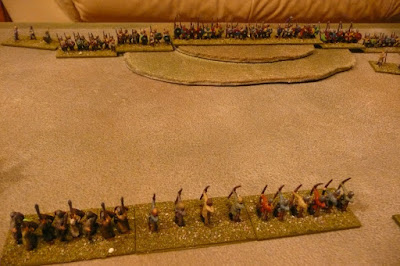 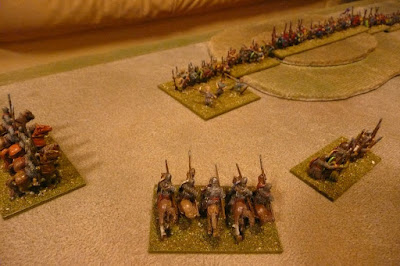 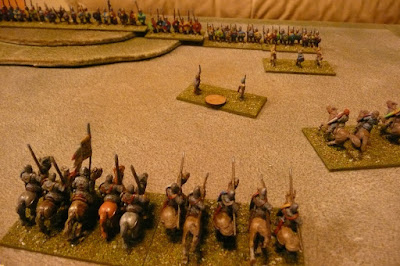 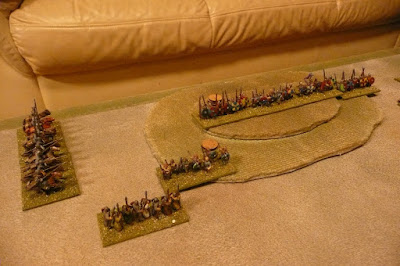 The end is nigh. 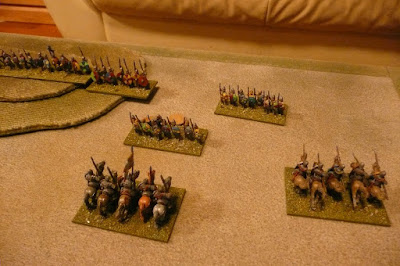 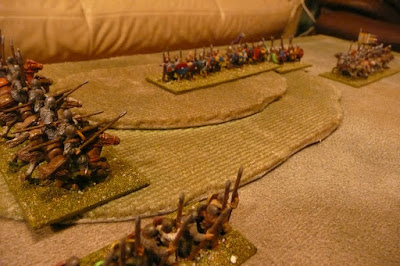 Thoughts: the Dux Bellorum rules again proved very good to play with. There were some nice tactical interchanges, particularly in setting up chances for advantageous missile fire, and I like the simple zone-of-control rules which allow you to fix the enemy in place to attack a flank but without leading to too much emphasis on geometrical shenanigans.

I need to tweak the armies a little, but the project seems like a winner so far, and I'm glad that I've invested time and lead into it.