Battle of Barnet on a board

I'm on a bit of a boardgame binge at the moment. Latest to the table is a War of the Roses game Blood and Roses by Richard Berg (not to be confused with Richard Borg...) and from GMT Games. Blood and Roses is the third in the 'Men of Iron' game series that focuses on battles of the Mediaeval period.

The rules to this contain features common to many games at this scale from the GMT stable:

- activation is by individual leader
- there are activation-order interrupt mechanisms
- combat uses a single d10 with lower numbers hurting the attacker and higher numbers the defender
- combat modifiers are based on troop match ups as well as local factors (terrain / disorder, etc)
- victory is decided by troops lost

Like Berg's American Civil War battle series 'Glory', this game uses neither quality modifiers (all units of a particular troop type are here treated the same) nor casualty tracking. There is a simpler morale based attrition system (disorder, retirement, elimination) instead of the casualty AND morale tracking systems found in the 'Great Battles of the American Civil War', 'Great Battles of History', or 'Musket and Pike' series.

The battle I'm going to do is Barnet; the reason being that I picked up one of Don Featherstone's books the other day for a browse and it included a Barnet scenario. 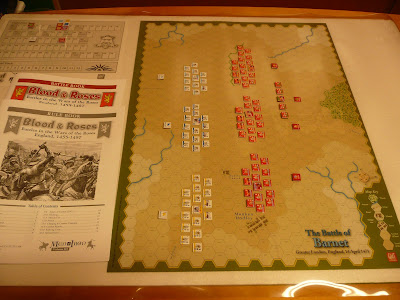 I'm looking forward to seeing how it goes. To be honest, I'm not a great fan of the 'activate by leader' and 'you may attempt to trump said activation' system when I'm playing solo, so I don't know if I'll get through the entire battle, but you never know!
Posted by Prufrock at 1:06 AM