It's been a while since I've had the brushes out, but as the year winds down (and after an invigorating tidy of the hobby room) I've pulled finger and tried to get a few things finished up to boost my 2015 painting tally.

At the moment I've got a selection of Companions, Thessalians and Xystophoroi (all Xyston 15mm figures) on the go. I can't quite remember the reasoning behind trying to put them all together in the one mass, but I'll worry about that later...

Anyway, these are still in a reasonably early stage of completion, but as I'd used a brown undercoat, I am using this bunch to experiment with the colours that will work best with it. So far I quite like the results, though the Coat d'arms chestnut wash has not worked well at all. This is not poor old Coat d'arms's fault though: in my zest for experimentation I simply forgot that a wash needs to be darker than its base-coat to be effective!

But enough blathering. Here are a few work-in-progress shots. 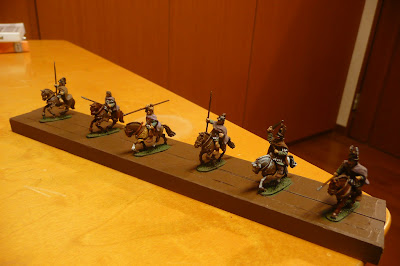 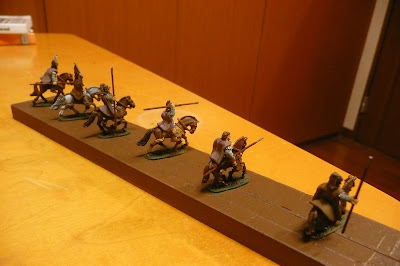 I've enjoyed it and have worked out a few useful paint combinations. Hopefully I'll manage to get these and the other twenty-odd in the batch done before the new year, but I've said that kind of thing before!
Posted by Prufrock at 1:57 AM