Being at a bit of a loose end last night I decided to try out Phil Sabin's free print and play Second World War grand-strategic sim [see the bottom of this page for the download].

With only twelve pages to print out - 4 of rules, 1 for the example of play, 6 of designer notes and a bibliography - it's easy on the ink. Counters and a map are also included, but I drew up my own board  on a bit of spare cardboard and scrounged the wooden bits box for pieces to use as the armies, production centres and strategic unit counters needed for play.

The map is pretty straightforward, so there is no need for great artistic talent to make a copy of your own. Germany is in the centre, with four territory 'strings' emanating from her. String one goes France-Britain; string two Alps-Italy-North Africa-Middle-East; string three goes Balkans-Ukraine-Caucasus; and string four Belorussia-Russia.

There are also boxes for generic strategic warfare units - representing bombing campaigns, submarine warfare and so on - mobilisation, and America.

The map below shows the board as envisaged by the game designer. 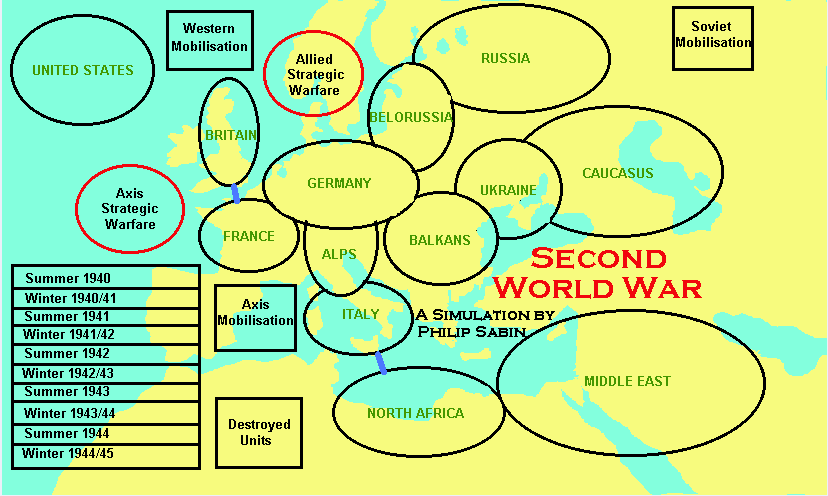 Each six month turn has four phases: movement, combat, strategic warfare, and production. Movement is from one front line space to another, and is subject to strict limitations.

Combat is by d6. Units which attack become automatically spent and have to get a modified 3+ to score a hit. There are limits to how many units can attack from one space to another and further limits when attacking across a strait.

Strategic warfare attacks allow players to put pressure on enemy production. Phil Sabin showcases his experience and skill here in devising a simple and effective way to include the war in the air and at sea in such an abstract game.

Production points are produced by fresh production units and are used to flip spent units (armies, production or strategic) to their fresh sides, or bring on new forces from the mobilisation boxes.

As is usual with Phil Sabin's games, there are a few exceptions to the normal rules, and these turn a simple system into a simulation. Be warned: players need to note down and remember these rules or else risk botching the whole thing!

Game play was quick (about an hour, including learning the rules and topping up the gin glass) but was surprisingly engaging, and I think I will be playing it again tonight. You can deduce from this that I feel it is a game worth printing out and giving a crack.

Summary - quick but interesting game filled with typical Phil Sabin touches: a broad-brush approach incorporating spent/fresh units, simple rules 'simulationified' through exceptions and combat modifiers, and all held together with a d6. Eminently soloable, it almost runs itself. The player's job is mainly to watch events unfold, but there is the occasional crucial decision to make.