Well, my first unit of the year is finished: 16 Old Glory Paionian cavalry in 15mm.  They have been given a very basic paint job, and so are nothing much to write home about except that they break what has been a pretty long painting drought.

According to Duncan Head in "Armies of the Macedonian and Punic Wars", the Paionians fought for Alexander, and under Lysimachus and the later Antigonids Paionia itself was incorporated into Macedon.

The horses were done in batches several years ago, and the riders given a white undercoat and straight flesh wash that was inspired by Simon MacDowall's method as demonstrated on his Legio blog.  He gets very good results, but I think for my style (characterised by a general laziness and desire to paint as few steps as possible!) I'll probably in future stick with my standard dark brown wash over a gray undercoat. 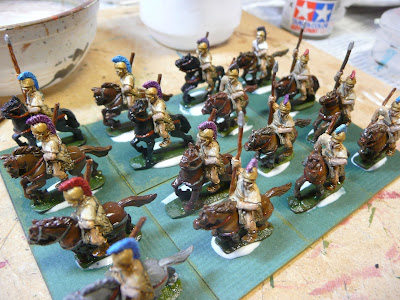 As usual with Old Glory cavalry there are two reasonably lively rider poses, but because of the large horse batch I did a few years ago I was able to mix horse from different packs across units, which gives, I think, a pleasing variation.

The tunics were, as mentioned, straight flesh wash over a white undercoat, and I then splashed on variously Tamiya Buff, Mr. Hobby Sail Color, Mr, Hobby Off-White, and Turner White. 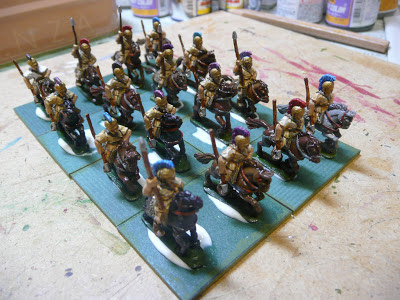 Just quietly, my camera lens might need a bit of a clean... 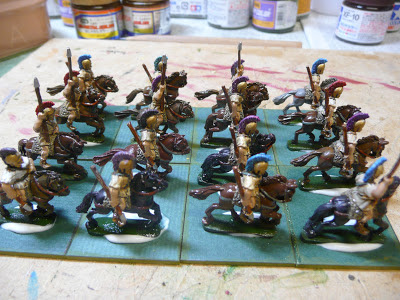 So there we have it.  They've had their two washes of Future/Klear for toughness and all that's left to do is apply a spray of matt varnish and flock the bases.

I might just have to do a Successor battle to see how they perform on the table!
Posted by Prufrock at 9:19 AM