Band of Brothers: Screaming Eagles by Jim Krohn was the second game I picked up on our recent excursion to Tokyo.

BoB:SE is a squad level WWII game focusing on the 101st Airborne from Normandy to the Battle of the Bulge.  Counters represent squads of 10-15 men, a weapons team, an individual gun and its crew or an armoured vehicle.  Ground scale is, so far as I can gather, around 40 yards to the hex, with a turn representing 2-3 minutes of real time.

There are five double-sided geomorphic maps, done in the style of the old Commando comics.  I quite like this, though I believe it rankles with some. 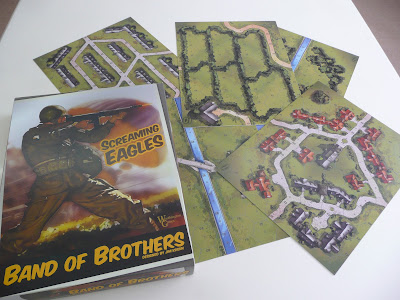 The counters are large and attractive, but while the game contains two counter sheets, half a sheet's worth of them are blank!  The ones that actually are counters do however look very good set up.  The pictures below do not show a real scenario but should give you some idea of the overall effect... 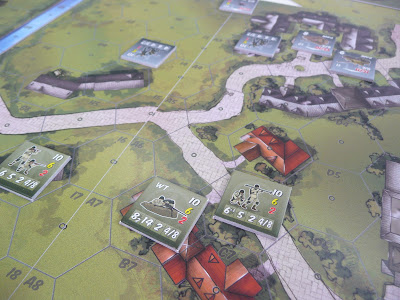 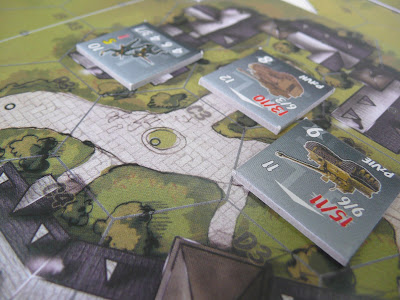 Also included are 16 historical scenarios that vary in size from one map to five, a quick reference card, and a rulebook, containing some excellent designer's notes.

The rules are for the most part clear, but there are a couple of errata issues caused by typos.  I had no trouble skimming through them quickly and starting a game immediately. 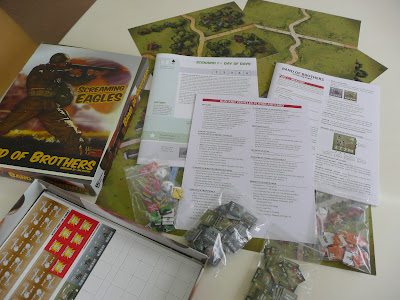 So far I've found it very enjoyable solo, even though it's really meant to be a two-player game.  It's simple enough to pick up and quite straightforward in play, but still seems to require skill and reasonably historical tactics (to my untrained eye!) to play well.  It was ridiculously expensive in the game shop I got it from, but I think it's going to be worth it.  After all, an expensive game that gets play is much better than any number of cheaper ones that don't!

Work calls me right at this moment but I will be back with some more thoughts on rules and a game report or two as time allows.

( Here is a link to a report of the first scenario, day of days ).