Reading Bob Cordery of (amongst other things) Wargaming Miscellany's fame's blog post on playing Memoir '44 solo reminded me of a solitaire variant I used to use to play Commands and Colors: Ancients.

The idea was initially inspired by something another fellow had posted (I think it was this, yet can't remember for sure), but I changed it around quite a lot and gave the non-player side certain advantages in the hope that it would become a more challenging 'me versus AI' type of game.  It is of course perfectly possible to play Commands and Colors games by drawing cards as normal and simply playing both sides, but as I do that with Lost Battles I found that I wanted something a little different.

The point of difference in these rules was that the 'AI' did not use the same card deck as me - it used a 'virtual deck', which divided the cards into seven types: left, right, centre, flank, leadership, special and troop.


The non-player turn consisted of me choosing the best three to five cards still in the virtual deck -with certain restrictions in place - and rolling a d10 to see which of the cards would get played.

The number of cards in the select pool depended on morale, which degraded as the non-player army took losses.  The higher the losses the greater the number of cards and the smaller the chance that the AI would get the cards that would be most effective.

When a card was used it would be crossed off the virtual deck and could not be used again until a 'reshuffle' had occurred, at which point the deck would be reset.  A reshuffle would be caused by the play of 'I am Spartacus' by the player side, or by the virtual player not being able to make a legal card selection. 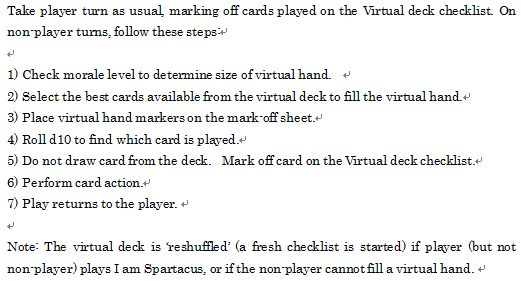 And that's about it.  I recall that I played about five games of Arausio with it, losing three out of five. In the end I decided it wasn't worth all the extra record keeping, so if I were to revisit it I think I would make or buy a second set of cards to use for the non-player hand to cut out the bookwork.

I would use this second deck to provide the selection pool for the non-player side, using twice as many cards as were officially in the non-player's hand with modifications as seemed sensible.  From that draw 3-5 cards would be selected, and I would most likely relax the restrictions on card types able to be selected.  The card used would be removed from the deck but the others would be put back in and the deck reshuffled.

This would make for less record keeping but at the cost of increasing the amount of shuffling.

So, there we have it.  Any and all comments and questions most welcome!
Posted by Prufrock at 12:49 AM