Introduction to Commands and Colors: Ancients

(This is a piece I wrote c.2006 for Keith McNelly's now defunct e-zine "Across the Table".  I have posted it mostly as-is, but dropped one paragraph. Note that it was written for a miniatures gaming audience in New Zealand who had not heard of the game before)

Introduction to Commands and Colors: Ancients. 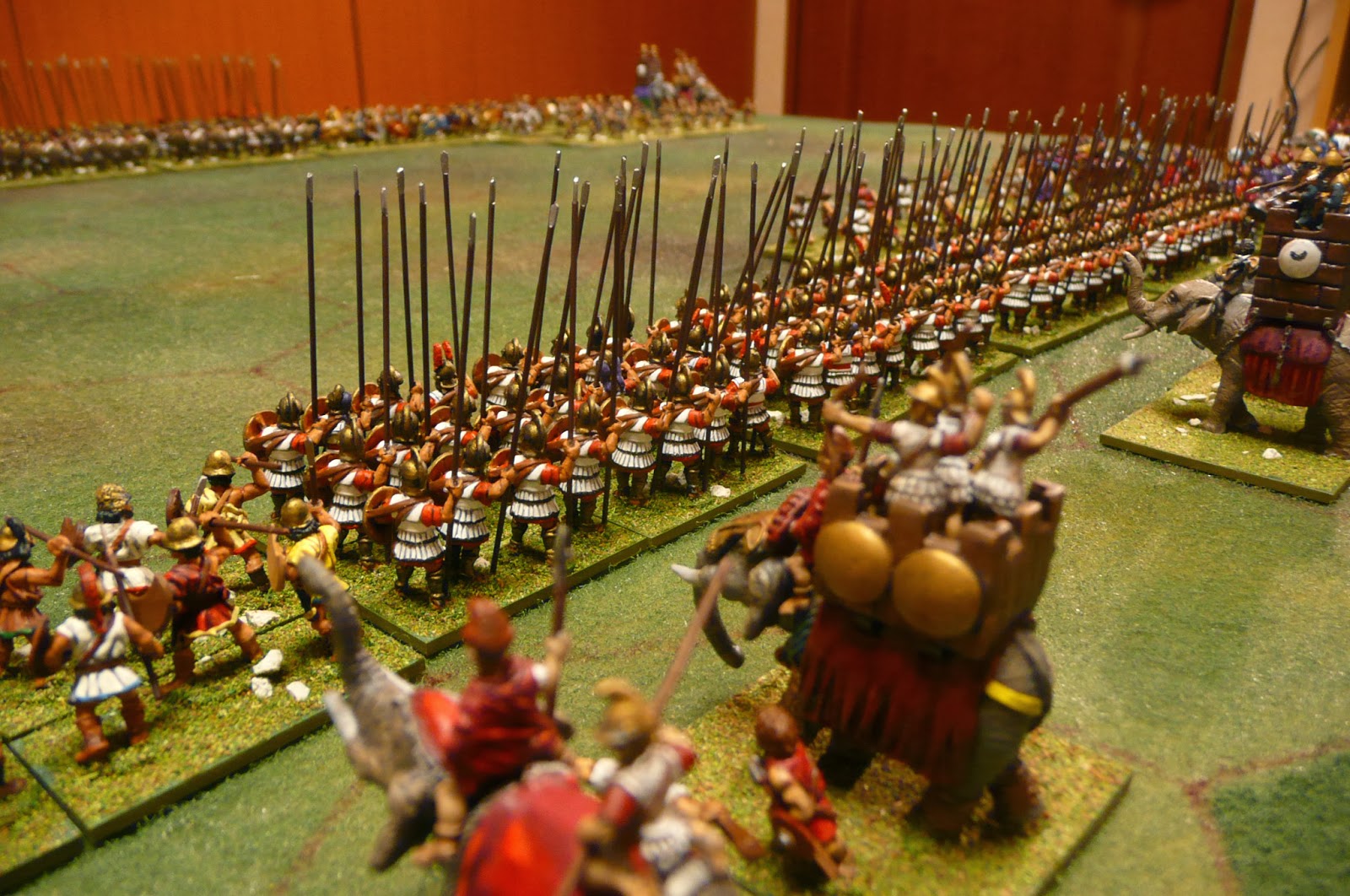 Commands and Colors: Ancients is a fast-play board war game designed by Richard Borg and published by GMT games.  The board employs hexes, and the pieces are wooden blocks.  Also included are command cards, custom dice, rules/scenario booklets and quick reference sheets.  The base game provides the armies of and while the first expansion adds troops for and .  The forthcoming second expansion is entitled " and the Barbarians" and will include Roman (probably of the Marian or Early Imperial variety) and "barbarian" armies.

Commands and Colors (hereafter called C&C) converts very well to miniatures.  All that is needed - aside from the miniatures, of course - is a suitably sized hex-cloth or hex-board, which can be home made easily enough or purchased from Hotz or Kallistra.  The following is a brief introduction to the C&C system.

In C&C all units can take a set number of hits before being destroyed: 4 hits for foot, 3 for cavalry, and 2 for special units such as elephants and chariots.

Special rules apply to some types of unit: most light troops and cavalry can evade enemy charges; warriors can move an extra hex if charging into combat; auxiliaries can move 2 hexes if they do not fight at all.  Elephants and chariots have a number of rules to reflect their special abilities.

Battles are played out on a hex board of 9 by 13 hexes.  The long side is divided into three sections to indicate the left, centre and right of the battlefield.  The scenarios in the booklet are all based on historical encounters.

In ranged combat hits are only ever scored on colours, never on swords or helmets.  Flags count as usual.

The Cards and the Turn.

Depending on the historical scenario being fought, players start the game with a hand of 4 to 6 cards.  Each card allows a particular class of troops (e.g. light units), troops in a particular area (e.g. 3 units left), or troops near a leader (e.g. leader’s hex +4) to be ordered.  At the beginning of the turn, the first player selects an order card from his hand, plays it and carries out the move.  A new card is drawn to end the turn.  The next player then repeats the cycle and this continues until a winner is determined.

The cards allow planning, but also mean that there is a healthy dose of uncertainty in the game.  Sometimes a player will get poor cards for a stretch, which can be frustrating, but the luck generally evens out.
.

Combat is simple, but with many variables.  There are three types of combat: missile, ordered close combat, and "battleback."  Ordered missile units in range of the enemy may roll 1 or 2 dice, depending on whether they have moved or not, and have a 1 in 6 chance of scoring a hit and a 1 in 6 chance of forcing a retreat for each die thrown.  Ordered units adjacent to the enemy can choose to undertake close combat.  A certain number of dice are rolled (heavy infantry roll 5 dice, light infantry 2, etc.) and hits are scored on the roll of appropriate symbols.  If the enemy unit is destroyed or forced to retreat the attacking unit may advance into the empty hex and may in some circumstances be able to make a second attack.  If the enemy unit is not destroyed or forced to retreat it may "battleback" and attack as if it had been ordered.

If forced to retreat, units must move their full movement allowance towards their own baseline.  If this is impossible, units must take 1 hit for each point of unused movement.   Supported units or units stacked with a leader can ignore one flag roll, so it is important to plan accordingly.  Retreat is especially dangerous for units with high movement rates.

Morale is not treated separately in C&C; it is factored into the combat and movement system.  Unit hits model casualties, disorder, and the loss of morale; all of which eventually turn the unit into a disorganised rabble which is no longer effective in the field.  This is the point at which the unit is removed from play.  Command cards also indirectly model the influence of morale states on movement in the same way that pip dice do.

The play of turns continues until one of the armies overcomes the other.  This process is measured in banners.  A banner is gained each time an enemy unit or leader is destroyed - or sometimes when an objective is taken - and as soon as a player has won the required number of banners he is declared the victor.  It is common for players to switch sides and play again with the highest number of banners overall determining the victor.

C&C is an abstract design.  Some people may not be comfortable with a game on ancient warfare that does not (for example) explicitly differentiate between units of different armour or weapon class.  In C&C all units of the same class function in the same way no matter whether one represents Roman triarii or a Macedonian phalanx.  What C&C provides is a fast moving, fun game that requires the use of tactics to win.  As with many rulesets, whether those tactics are realistic or not is open to question.

C&C tries to be a good game, not a simulation.  It gives a feel for ancient warfare but not at the expense of simplicity and playability.  However, the system can bear some tinkering, so additional levels of detail can be added fairly easily and without destroying the essence of the game.

At around US$50, C&C:A is not cheap unless you intend to play it as a boardgame also.  I have the base game and the expansion, and can honestly say it has been excellent value for money.  I have probably played around 60 games in 12 months, and it stands up well for solo sessions, too.

For anyone interested, a quick google search will yield a wealth of information about the game including the living rules, user-created scenarios and army lists for pick up games.