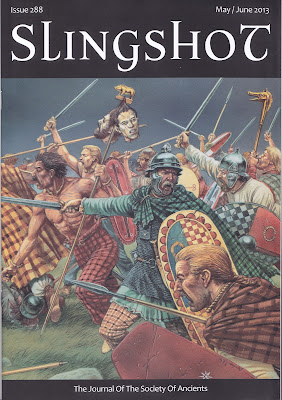 Slingshot 288 has now been sent out to subscribers.

In it you will find two campaign game frameworks, a battle report, three historical articles, an opinion piece, two book reviews and reviews of three sets of figures.

Editorial: Slings and Arrows, by Perry Gray.
A Short History of the Iberian Peninsular from 400 to 1100AD, by Robert Heiligers.
St Albans, 17th February 1461, by John Graham-Leigh.
Transjordanian Tales, Part 5, by Alistair McBeath.
The Roman Republic Against the Italian Gauls, by Julian Lorriman.
Gauls and Romans Scenario, by Mark Wilson.
The Calamitous Fourteenth Century, by John Graham-Leigh.
Tablets of Stone, by Nick Harbud.
Book and Figure Reviews, by Duncan Head and David Edwards.

Slingshot is issued 6 times a year to members of the Society of Ancients.

Subscription currently costs ｣24 for six issues. You can subscribe through the store at the Society's website, http://soa.org.uk
Posted by Prufrock at 12:26 AM