Have been very quiet here of late for many reasons, mostly family related.  Still, I managed to playtest a rough draft of some ideas I have for simple, multiplayer, newbie-friendly, ancients rules.

I've borrowed ideas from from Lost Battles, Commands & Colors: Ancients, Unhappy King Charles, Friedrich and no doubt other places as well and tried to put them together into something that resembles an interactive card game using miniature and gridded terrain.

The first playtest showed that the building blocks work, but that there are plenty of improvements to be made and puzzles to be solved, so I'm pleased.  The test game was just looking, in isolation, at how combat between two lines of infantry might go.  Here are some shots of the test in progress, showing different stages of the turn.

1) Command phase.  Orders are sent out. 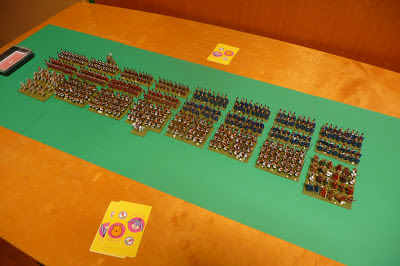 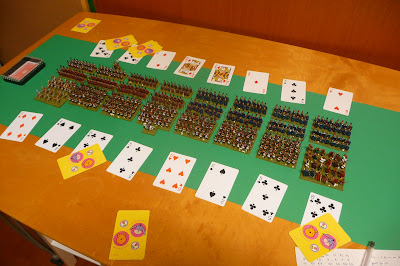 3) Combat phase.  Combats are resolved and hits allocated (only one in this example). 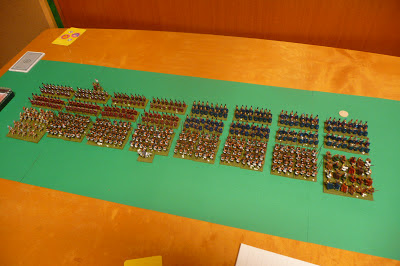 4) Reinforcement phase (further along in the game) where commands can be used to feed in fresh troops. 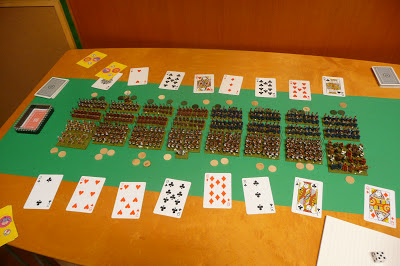 5)  And back to the start (this about eight turns in). 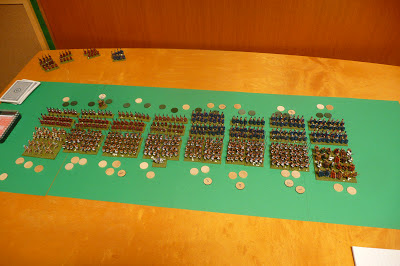 There we go.  It's all a bit messy at the moment, but hopefully things will improve as it gets more streamlined.

Anyway, time to go and watch the All Blacks play the red rose of England.